The durable, battery-powered smart speaker for outdoor and indoor listening.

Get brilliant sound anywhere with the weatherproof and drop-resistant Move. Control with your voice, the Sonos app, and Apple AirPlay 2 at home, and stream via Bluetooth® when WiFi isn't available.

Compatible with:
Finely tuned to your surroundings
Enjoy surprisingly rich bass, a wide soundstage, and automatic Trueplay™ tuning, which continually adapts the sound for where you are and what you’re listening to. 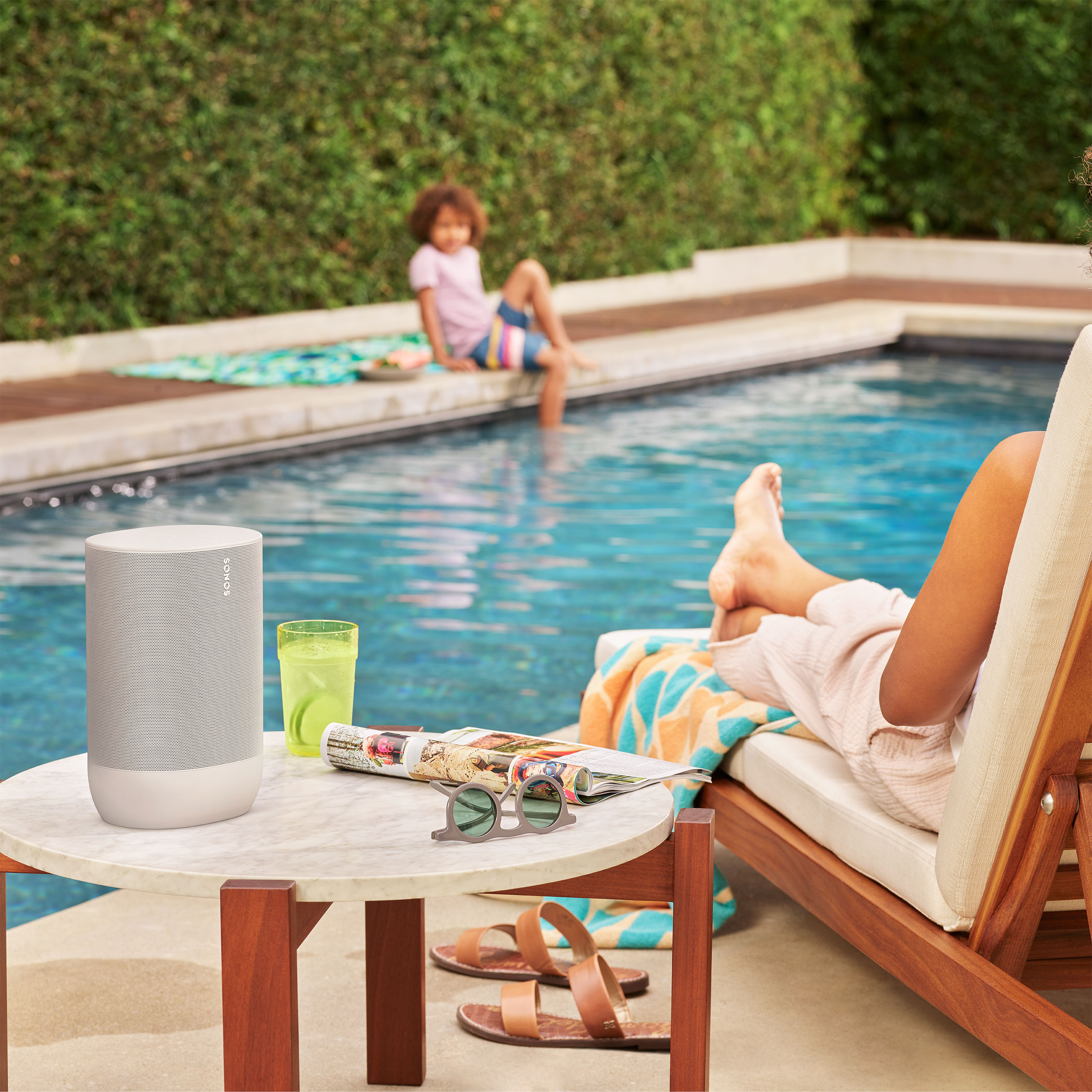 Skipping this song
Shuffling your playlist
Setting your alarm
Voice control
Amazon Alexa and Google Assistant are built right in so on WiFi you can play music, check news, set alarms, get your questions answered, and more, completely hands free.
Subject to regional availability.
Google is trademark of Google LLC. 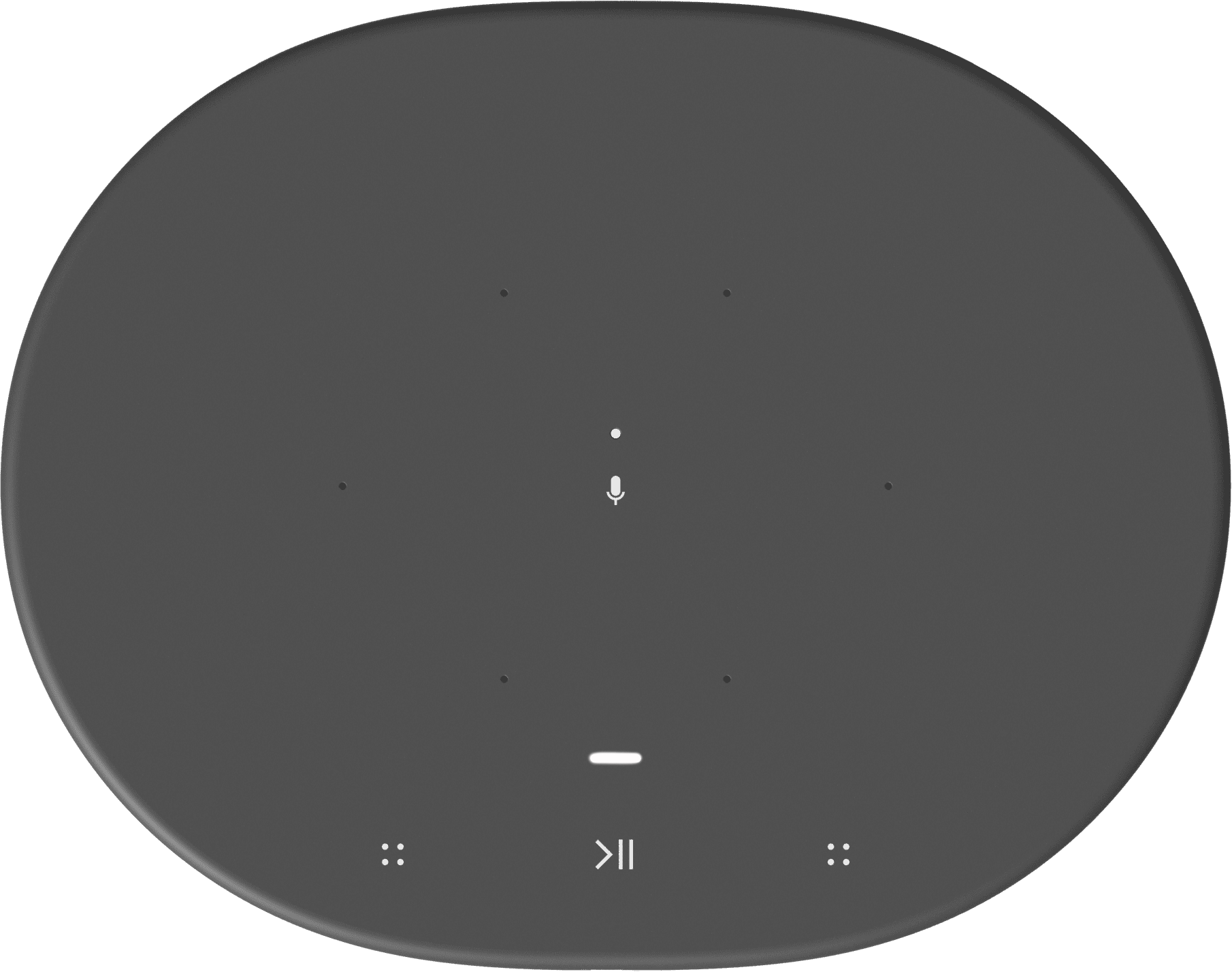 WiFi
Bluetooth
WiFi and Bluetooth
Stream over WiFi and connect Move to the rest of your Sonos system at home. Switch to Bluetooth when you're offline.

Don't worry about accidental drops or bumps. Move's components are protected by a hardwearing, shock-resistant case.

Move fits seamlessly into the included charging base and features an ergonomic handle, making it easy to pick up and carry.

Enjoy up to 11 hours of continuous play time and rich sound. Easily recharge Move on the included base, or get power on the go with a compatible USB-C charger. 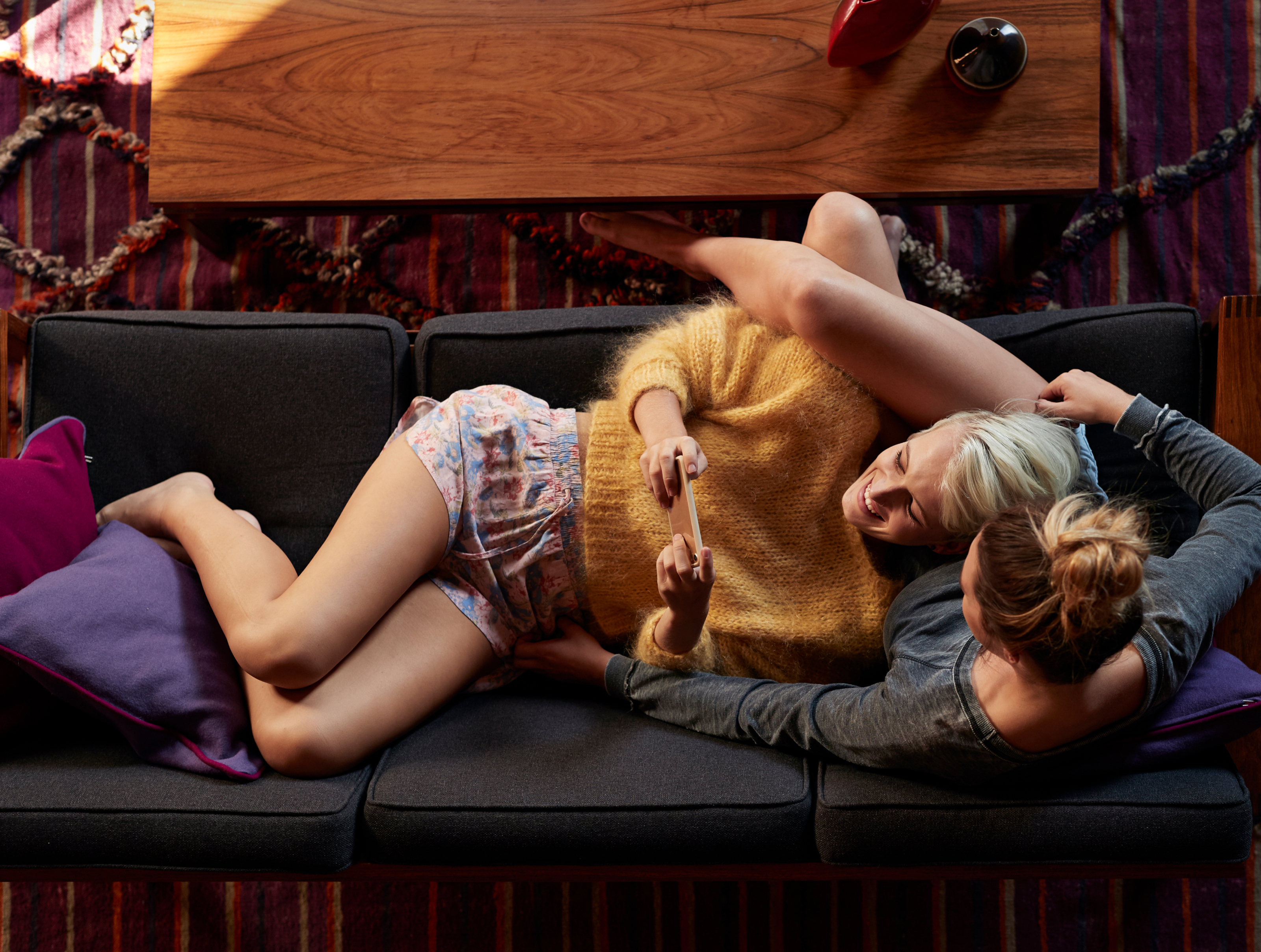 Sonos Radio HD is here
Upgrade to the ultimate radio experience.
Learn more
Two Class-D digital amplifiers perfectly tuned to match the speaker drivers and acoustic architecture.
Responsive audio chime lets you know Sonos Move has heard you and is working on a response.
Far-field microphone array uses advanced beamforming and multi-channel echo cancellation so your voice assistant can be readily activated.
One downward-firing tweeter creates a crisp, clear high-frequency response that disperses evenly for an ultra wide soundstage.
One mid-woofer integrated into the cabinet ensures faithful playback of mid-range vocal frequencies plus deep, rich bass.
IP rating
Rated IP56 for protection from dust particles and liquid splashes.
Dimensions - H x W x D
9.44 x 6.29 x 4.96 in. (240 x 160 x 126 mm)
Product Finish
Shadow Black or Lunar White with matte finish
Top-panel features
Capacitive touch controls for volume up/down, previous/next track, play/pause, microphone mute. LED indicates status, mute status, and voice feedback.
Complete privacy
An illuminated LED indicator light ensures you’re always aware when the speaker’s microphone is active.
Weight
6.61 lb (3 kg) including battery
Power supply
USB-C adapters must support one or more of the following output levels: 12V/3A, 15V/3A, 20V/2.25A.
Charging base power supply
Input: 100-240V, 50-60 Hz, 1.2A; Output: 18VDC, 2.5A
WiFi
Supports 802.11 a/b/g/n, 2.4 GHz, and 5GHz.
Bluetooth
Stream music and more with Bluetooth when you're away from home using your phone or another capable device.
Apple AirPlay 2
Works with AirPlay 2 on Apple devices iOS 11.4 and higher.
Battery
36WH
Up to 11 hours per charge
Playback from -10°C to 55°C.
Charging from 0°C to 45°C.
Sonos Move, Indoor Charging Base, Quickstart Guide, and Legal Booklet
Simple financing
Set up low monthly payments when you select Klarna at checkout.
Free shipping
Enjoy free expedited shipping anywhere within the US.
Easy returns
Not exactly what you wanted? Return it within 45 days. We'll cover shipping.
Professional installation
Find a certified installer to customize your architectural Sonos system.
Listen now, pay later
Creating your sound system is even easier when you finance with Klarna.
Easy payments
Get low monthly payments with special financing.
Flexible plans
Set up payments that match your budget.
Pay in installments
Shop today and split purchases into 4 equal interest-free installments.
How do I use Bluetooth?
Once you have set up Move on your WiFi network, press the Bluetooth/WiFi mode button on the back of the speaker to switch to Bluetooth mode. The LED on top of the speaker will illuminate blue. To pair, select Move from the list of available devices on your phone. If it does not appear, press and hold the button.
What does the Sonos app do on Bluetooth?
The Sonos app will control your system on WiFi but not Bluetooth. To listen on Bluetooth, use a streaming service app, such as Spotify.
Does voice control work on Bluetooth?
No. You must be connected to WiFi for the Google Assistant and Amazon Alexa to work on Sonos.
Can I stereo pair Move?
Yes. You can pair two Moves on WiFi for stereo sound.
Can Move stereo pair or group while in Bluetooth?
No. Move will only stereo pair or group with your Sonos system when connected to WiFi.
Can I use two Moves as home theater surrounds?
No.
Does Move pair with Sub?
No. Because Move is designed to move around your home, pairing with Sub would result in mid and high frequencies in one room and bass in another for imbalanced sound and an inferior listening experience. You can, however, group Move with a system that includes Sub, such as a 5.1 home theater setup.
What does the IP56 rating mean?
An IP rating is an international standard that defines how effectively electrical enclosures resist intrusion from foreign elements, such as dust and moisture. The numbers that follow “IP” have specific meanings. The first ranges from 1-7 and defines the degree of protection from foreign elements, such as dust. The second ranges from 1-9 and defines the degree of protection from various forms of moisture, including sprays, drips, and submersion.

Move is rated IP56, meaning it is protected from very fine particles, such as dust, and heavy liquid splashing, including heavy rain and snowfall.

Is the charging base weather resistant?
No. The speaker itself was designed for outdoor use and is therefore resistant to water, dust, and other elements. The charging base, however, should only be used indoors.
Is the charging base weatherproof?
No. The charging base is designed to be used indoors. A compatible USB-C charger is recommended for outdoor use.
Can I take Move to the beach?
Yes.
How long does the battery last?
Move’s battery will last for up to 11 hours of uninterrupted playback. Pausing, volume level, Bluetooth, heat exposure, and other factors will cause battery life to fluctuate. If left off the charging base and unused, the battery will last about 120 hours.
What’s the lifespan of Move's lithium-ion battery?
The battery should last about three years or 900 charges, after which you can purchase a replacement battery.
Does Move meet TSA carry-on regulations for lithium-ion batteries?
Yes. You can pack Move in your carry-on bag while flying.
How does auto Trueplay work?
Move's microphones detect what you're playing and measure the frequency response from your surroundings. Using software, the speaker then adjusts its EQ for perfectly balanced sound.
Will auto Trueplay work if the microphones are off?
No. The microphones must be on for auto Trueplay to work.
How often does auto Trueplay adjust the sound?
Auto Trueplay is triggered whenever Move is placed in a new location, and it continuously refines the sound while Move is stationary.
Does automatic Trueplay work when Move is on Bluetooth?
Automatic Trueplay currently only works on WiFi.
Do the microphones hear commands when audio is playing?
Yes. On WiFi the far-field microphones in the speaker detect your voice from any direction. You can speak at a natural volume to activate supported voice commands.
Can I turn the microphones off?
Yes. Simply touch the microphone icon and the light will turn off indicating that the microphones are inactive. The light is hardwired so you know that the microphones are only active when it is illuminated.
Does Move come with a charging base?
Yes, Move includes an indoor charging base for quick power while you listen. You do not need to purchase a standalone charging base.
Do I need an additional charging base?
No, Move does not require that you purchase an additional charging base. However, you can purchase an additional charging base for quick power wherever you need it in your home.
Take a comprehensive look at the set up, function, and maintenance of Move. The user guide details all of its specifications and how to care for your Sonos speaker.
Move user guide

An extra hour of battery life
A recent software update increases Move’s energy efficiency so you can enjoy up to 11 hours of great sound on a single charge.
All your services in a single app
Sonos S2 is more than just an app. It's a platform that brings together all your streaming, voice, and control services so you can easily browse music, radio, podcasts, and audiobooks and listen your way. 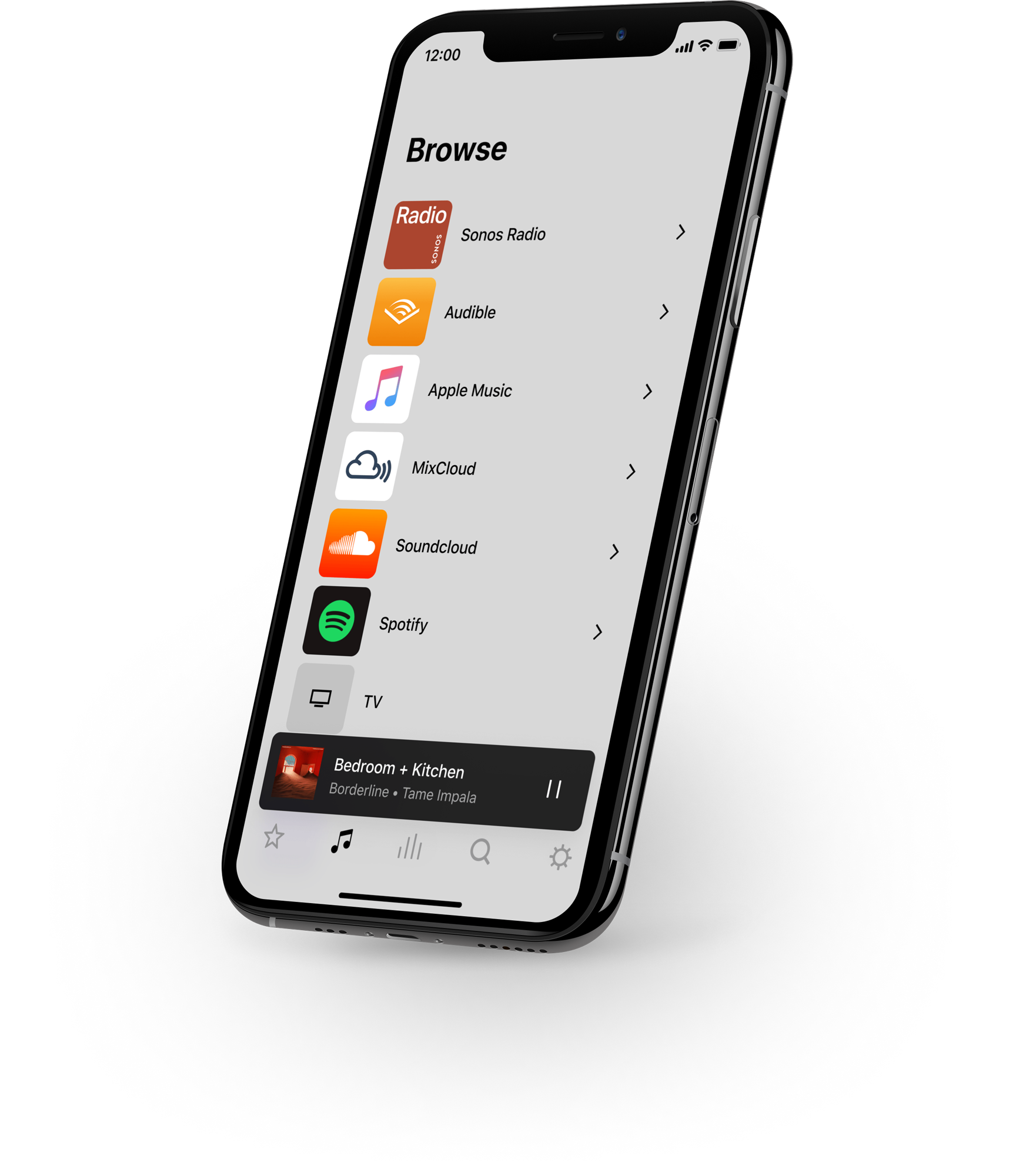 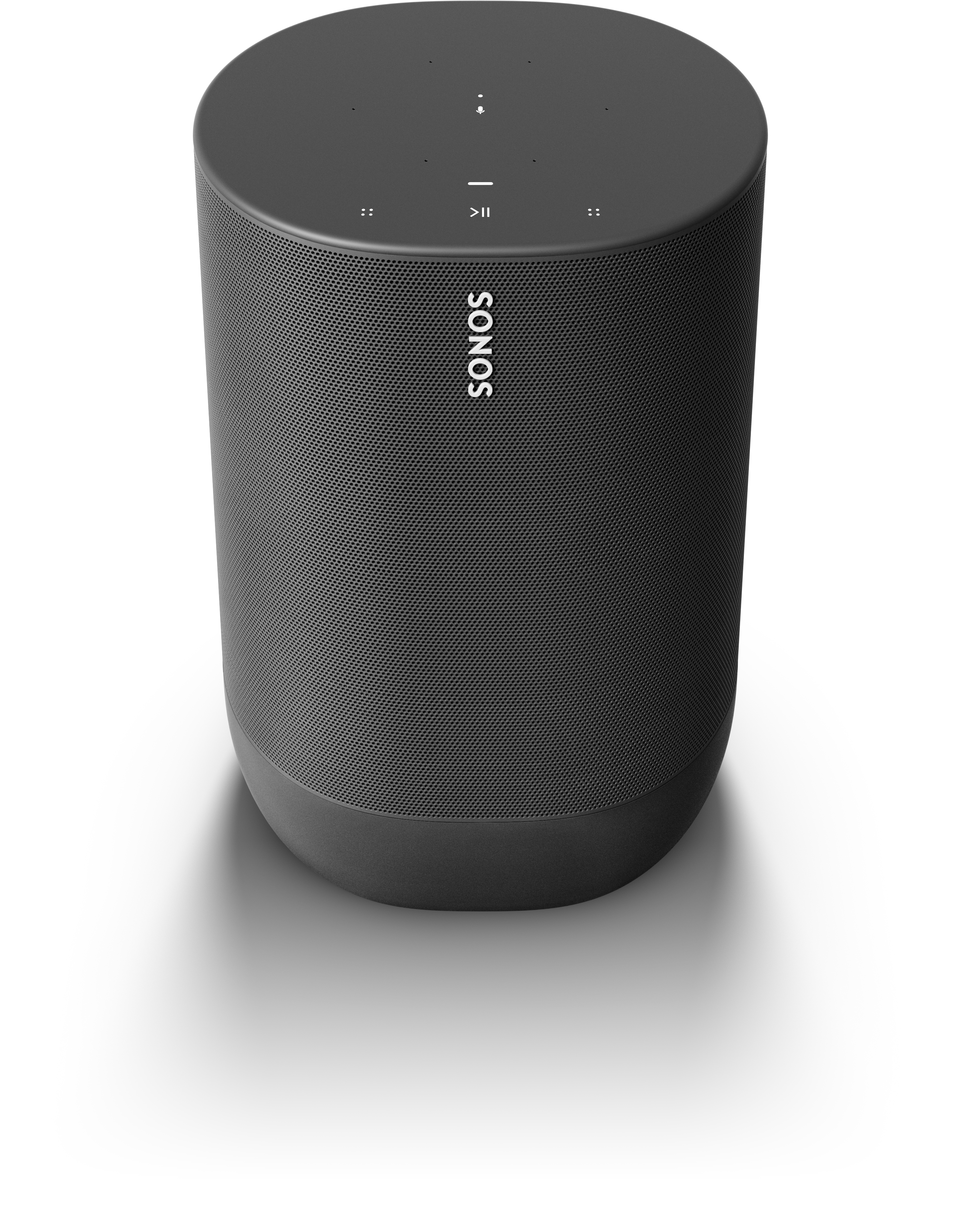 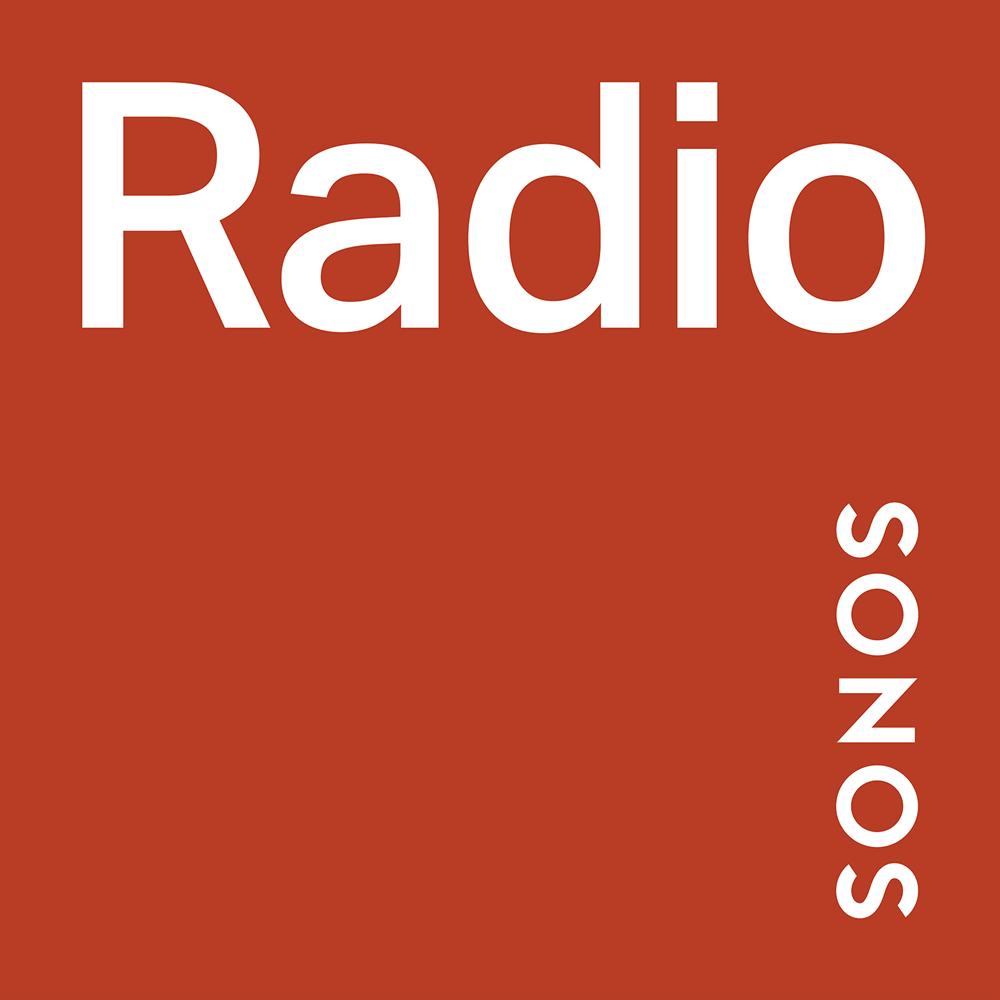 Brilliant Sound
Enjoy clear, richly detailed sound that fills the room at any volume.
Easy to Use
Setup takes minutes, and control is simple with the Sonos app, Apple AirPlay 2, and your voice.
Listen Your Way
Customize your system and play what you want, where you want.
Learn more